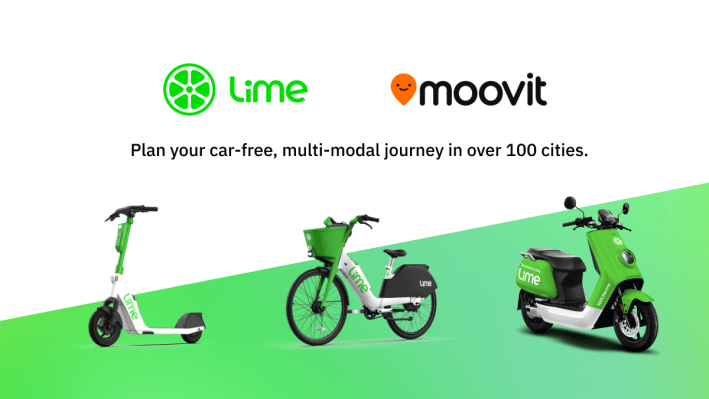 Shared electric micromobility company Lime announced a partnership to integrate its electric scooters, bicycles and mopeds into the Moovit trip planning app. Starting next week, Lime vehicles will be listed as a travel option alongside public transportation for all or part of a multimodal journey in the Israeli app.

Nearby Lime vehicles will appear on Moovit in 117 cities in 20 countries, including the United States, South Africa, Australia and across Europe. Lime says this partnership is the largest micromobility integration within a fully dedicated mobility-as-a-service (MaaS) app to date, based on the number of cities involved. He plans to add another 40 cities in the coming months.

The partnership between Lime and Moovit, which is a subsidiary of Intel Mobileye, follows a trend in the world of transportation that integrates public transportation, ride-sharing and micromobility into one streamlined system. Uber, one of Lime’s main investors, delivered a White paper this year it presents its plans to facilitate such centralization of mobility modes. Some public transportation agencies, such as St. Louis Metro Transit, which have seen a decrease in passenger numbers, hope that directing users to third-party applications that design different forms of mobility will eventually win it back. Others might see joining forces as a way to get passengers out of cars, giving them perfect options for traveling the last mile from home to the train station without contributing to carbon emissions.

“This partnership means that mobility companies recognize the need to collaborate together to offer passengers more convenient shared and public transportation modes when they return,” said Nir Erez, co-founder and CEO of Moovit, in a statement. “Offering more alternative options that can easily get people to their destinations is a critical component of a MaaS platform, especially in some of the world’s most congested cities.”

Lime is touching cities for a moment, no doubt in a way that will lead to more permitting for the micromobility giant. The pandemic has prompted many cities to embrace micromobility and write recovery plans that highlight sustainable mobility.

“Moovit captures a market focused specifically on local and commute planning, and it is hoped that helping riders access micromobility as part of those trips will reduce car travel and further encourage people to take the public transportation again, ”Tiffani Gibson, Lime’s senior manager of corporate communications, told TechCrunch. “We want cities to see us as a sustainable partner that works in conjunction with the broader transportation ecosystem. We provide an additional service that facilitates and encourages traffic connections, especially in traditionally underserved areas. We want passengers to return to transit along with our service and we seek to replace car travel, not transit travel. “

According to Moovit’s COVID-19 mobility report, public transport is on the rise again in big cities like New York, Paris and London, which is probably why Lime wants to enter the market now. Last month, 41% of Lime scooter trips were made during peak travel hours, according to data from the company, which also says historical data has shown a significant number of trips on Lime connecting passengers. with public transport.

Lime is also integrated with Google Maps, one of the most downloaded MaaS applications in the world, but I would not say in how many cities Lime vehicles are integrated with the application. In Google Maps, users can choose the route of their destination by car, public transport, on foot or by bicycle. Motorcyclists are offered Lime vehicles as a transportation option for the entire trip, while with Moovit, the goal is to have Lime vehicles for first- or last-mile public transportation solutions.

With Google Maps and Moovit, users can see in real time where a Lime vehicle is nearby, how long it will take to walk there, an estimated cost of the trip, and the percentage of battery remaining. To unlock the ride, users will be redirected to the Lime app after clicking on the logo.