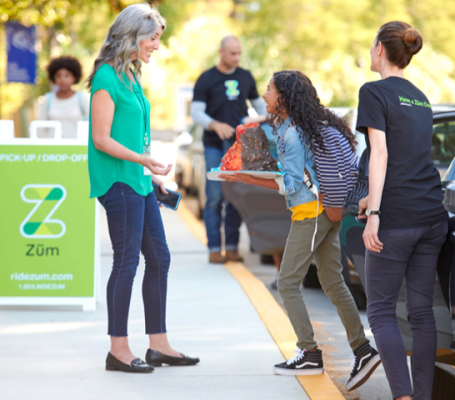 The San Francisco Unified School District (SFUSD) awarded Zūm, a startup that wants to improve student transportation, a five-year, $ 150 million contract to modernize its transportation service throughout the district.

Zūm, which already operates its bus and ride share service in Oakland, much of Southern California, Seattle, Chicago and Dallas, will be responsible for handling daily operations, transporting 3,500 students across 150 school campuses beginning this semester of autumn. The startup’s fleet of 206 buses, vans and cars is distributed based on specific use cases, placing students who live on busier routes on school buses and sending cars and vans for others to increase efficiency. Zūm will also facilitate more than 2,000 field trips per year for the school district.

Aside from Zūm’s $ 53 million five-year contract with the Oakland Unified School District, which began in 2020, the SFUSD contract is the largest the startup has ever won. The company intends to use the funds to lease vehicles, hire drivers, a combination of salaried employees and gig economy workers, improve customer and operational support, and research and develop product improvements to support the contract, he said. a Zūm spokesperson to TechCrunch.

Zūm’s transportation solution for SFUSD is expected to save the district an average of $ 3 million per year, based on the cost of the licensee’s solution.

“These savings are driven by our technology-driven operations and route optimization,” a spokesperson told TechCrunch. “Zūm has absorbed all the drivers who previously worked at SFUSD. The buses that were used previously were old and owned by the owner and have been moved out of town. Zūm has deployed a new fleet of connected school buses and other vehicles, which will go electric in 2025. “

Along with its fleet, Zūm offers school districts a cloud-based dashboard that allows them to manage operations, track movements, plan budget usage, and analyze performance and service data, type of technology that makes sense for schools, but still seems radical given the slow pace of the public sector.

“A major challenge we experienced in the past was gaining visibility into the location of students and buses throughout the district,” said Orla O’Keefe, SFUSD’s chief of policy and operations, in a statement. “We hope and hope that our families will benefit from Zūm’s student-centered technology. Families will be able to track their child’s bus in real time and easily communicate with the driver regarding their child or any unique circumstances that may arise. “

Included in the contract is Zūm’s goal to help SFUSD electrify its entire fleet by 2025. Last year, the SF District Board of Education adopted a resolution to modernize its transportation in a way that would create more efficiencies, help the district meet sustainability goals, and increase transparency throughout the system. Zūm says this contract will mark the first time SFUSD has upgraded its transportation solution in 40 years.

Earlier this month, Zūm announced a partnership with AutoGrid, a power distribution and management software company, to transform the company’s fleet of electric buses in San Francisco and Oakland into one of the largest virtual power plants in the world. world.

“These contracts are the building blocks of Zūm and Autogrid’s vision to create a 1 gigawatt virtual power plant in the next 4 years,” said a Zūm spokesperson. “The Oakland Unified District and the San Francisco Unified District are the first two districts in the US to commit to a 100% conversion to a zero-emission electric vehicle fleet. Between these two contracts, Zūm will carry around 60,000 KwH of battery charging in its fleet of electric vehicles. To put this in perspective, during a power outage, this amount of storage energy can power around 47,000 homes per hour. “