Unlike a weak phone signal that only causes a grainy sound, in growth marketing, it can mean the difference between a successful program or a massive cash bleed. As we move into an increasingly privacy-centric world, it’s even more necessary for companies to define the signal from the start.

So what exactly is “signal” in growth marketing? It can have many different meanings, but holistically speaking, it is the event data in our arsenal that helps guide decisions. When it comes to paid acquisitions, it’s vital to optimize and transfer the correct event data to the paid channels. This is so that the targeting and bidding algorithms have the richest data to use.

I’ve seen startups spend thousands of dollars inefficiently as a result of not having an optimal signal in their paid acquisition campaigns. I’ve also spent millions on companies like Postmates refining our signal to the best possible state. I’d like every startup to avoid the painful mistake of not having this set up correctly, rather than making the most of every major ad dollar.

When starting out, it may seem obvious to optimize towards a north star metric, such as a purchase. If the spend is minimal, that could mean that the volume of conversions will be low in all campaigns. On the other hand, if the optimization event is set to a top-of-funnel event, such as a landing page view, the signal strength can be very weak. The reason the force may be weak is because a low intention event is successful on paid channels. By marking a landing page view as successful, paid channels like Facebook will continue to find users similar to these lower propensity users they are converting.

Let’s take an example of a health and wellness app with the goal of boosting memberships to your training program. They are just beginning to explore paid acquisition and spend $ 5,000 per week on Facebook. Here’s a look at your events in the funnel, weekly volume, and cost per event:

Example of a health and wellness app and its weekly conversion volume with a spend of $ 5,000. Image credits: Jonathan Martinez

In the example above, we can see that there is a significant volume of visits to the landing page. As we go down the simplified flow, there is less volume as users leave the funnel. Almost everyone’s instinct would be to optimize for the landing page view, because there is so much data, or the sign-up event, because it is the strongest. I would say (after extensive testing on various ad accounts) that none of these events would be the right choice. With landing page views as an optimization event, users have an excruciatingly low propensity as the conversion rate from landing page view to subscription is 0.61%.

The correct event to optimize here would be the registration or the start of the test because they have enough volume and are strong signals that a user is converting to the metric of the north star (subscription). As for the conversion rate between signup and signup, it’s a much healthier 10.21% versus 0.61% for the landing page view.

I am always a huge advocate of trying all events as there can definitely be big surprises in what may work best for you. When testing events, make sure a statistical baseline is followed for decision making. Also, I think it’s good practice to test events regularly up front because conversion rates can change as other channel variables are adjusted.

In certain cases, the current events that are set up are not optimal for paid acquisition campaigns. I’ve seen this happen frequently with startups that have long periods of time between conversion events. Take for example a startup like Thumbtack, which offers a marketplace of vendors that can help with home repairs. After someone signs up for your app, the user can apply but not hire anyone for a few weeks. In this case, making flow adjustments could potentially improve the signal and the data it collects from users.

One solution Thumbtack could implement to collect a stronger signal would be to add another step between the request being made and hiring someone. This could be a survey with propensity check questions that might ask how soon the user needs help or how important their project is from a 1 to 10. 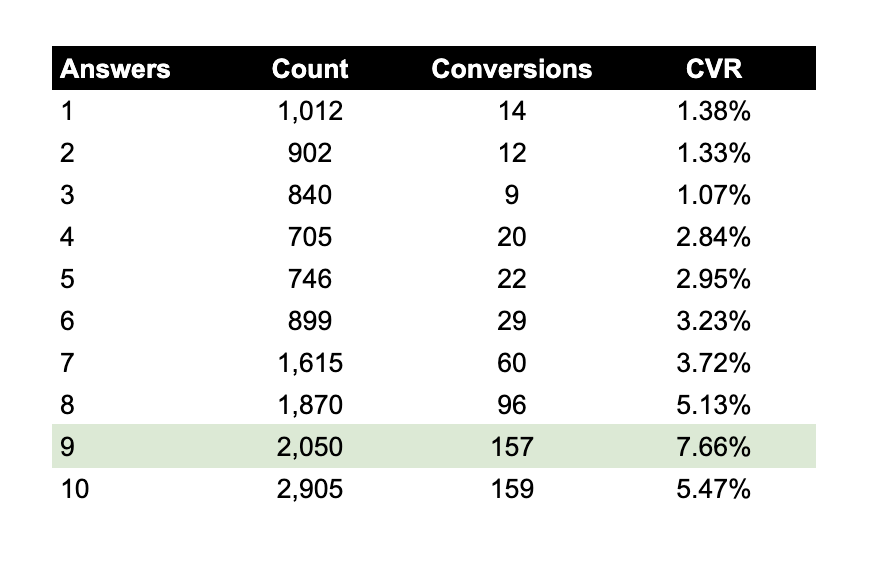 After accumulating the data, if there is a high correlation between the survey responses and someone starting their project, we can begin to explore optimization for that event.

In the example above, we see that users who responded with “9” have a conversion probability of 7.66%. So this should be the event we optimize for. Artificially adding steps that qualify users in a longer flow can help steer optimization in the right direction.

Let’s imagine you have the most ideal stream that captures large volumes of event signal without much delay in your optimization event. That is still far from perfect. There are countless solutions that can be implemented to further improve the signal.

For Facebook specifically, there are connections like HEADS which can be integrated to transmit data in a more accurate way. CAPI is a method of transferring web events from server to server rather than relying on cookies and the Facebook pixel. This helps mitigate browsers blocking cookies or users who can delete their web history. This is just an example. I won’t go through all the channels, but each one has its own solution to help improve the event signal that is returned to it.

This wouldn’t be a column written in 2021 without mentioning iOS 14 and the strategies that can be leveraged for this growing segment of users. I have written another part about specific iOS-14 tactics, but I’ll cover it here on a broad level. If the North Star metric event (i.e. purchase) can be triggered within 24 hours of the initial app launch, then that’s gold.

This would bring in large volumes of high intent data that would not be at the mercy of the SKAD 24 hour event timer. For most companies, this may seem like a lofty goal, so the goal should be to have a fire event within 24 hours that is an indicator of high probability that someone will complete their north star metric. Think about what events happen in the flow that lead to someone finally buying. Maybe someone adds a payment method within 24 hours and historically it has a 90% conversion rate for someone who buys. An “add payment information” event would be a great conversion event to use in this case. The landscape of iOS 14 is constantly changing, but this should apply for the foreseeable future.

Incrementality and stay ahead

As a general rule of thumb, incrementality checks should be performed consistently in growth marketing. It offers important reading on whether ad dollars are attracting users who would not have converted if they had not seen an ad.

When comparing optimization events, this rule still applies. Make sure that costs per action is not the only metric that is used as a measure of success, but that you use the incremental increase in each conversion event as the definitive key performance indicator. In this piece I detail how to run tight incremental tests without data scientist swarms.

So how can you stay ahead and continue to move the needle in your growth marketing campaigns? First of all, constantly question the events you are optimizing for. And second, leave no stone unturned.

If you use the same optimization event forever, it will be a disservice to your campaign’s performance potential. By experimenting with flow changes and running tests on new events, you will be well ahead of the curve. As you iterate through the flow, think about user behavior and events from the user’s perspective. What flow events, if aggregated, would correlate to a high-propensity conversion segment?